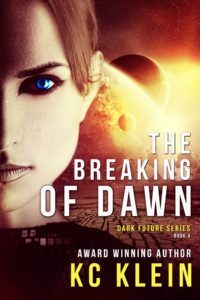 A gritty, yet seductive novel with a unique visualization of the plight of women in society. Fast paced, well written characters, and great storyline make this a MUST read! Loved it!

“Well written, author Klein knows that words are her tools, and she wields her tools well.”

The last book in the Dark Future Series. Read the exciting conclusion in The Breaking of Dawn.

The Rebellion has one final hope…

Dawning Hope Smith is the symbol of the New Republic who will lead the people, destroy the aliens, and unite all mankind.

Or is she?
Sometimes you break.

As Dawn struggles to find her place in the Prophecy, she realizes her destiny is dependent on the one mans she can’t stand. When pure evil strikes, she’ll need him, heart and soul, if she wants to survive… The Breaking of Dawn.

I am Dawning Hope Smith, and I live on a planet of perpetual darkness.

No really, there’s no sun, there’s no dawn, and there sure isn’t much hope. All we’ve got is a few hours when the twin moons come together and form what’s called the graying hours. Yet, it’s where I live…Dark Planet.

Yes, I know Dawning Hope… a bit zealot-like even for two of the greatest leaders of the Rebellion, but my parents had high expectations for me—keep my identity a secret, terminate all aliens, fulfill the Prophecy by uniting the entire human race, blah, blah, and oh yeah—epic blah.

But sprawled out fully dressed on a thin mattress, hands folded under my head, my hopes leaned toward the bit more realistic. Like, I needed to do my part for the Rebellion, needed to become a shooter for the Sweepers, needed to do something other than sit around and wait for some latent genetic power to emerge that allowed me to save the world.

Not that I’d been holding my breath or anything. If it hadn’t happened yet, pretty sure the DNA-gene some women developed wouldn’t start mutating inside me overnight. But try telling my parents that.

A “fake-dawn,” simulated by the hydro-powered lights, slowly brightened my room, bringing my boring, mundane life back into existence—dirt ceilings, stone walls, concrete floors, all in gray-black with a smattering of army green thrown in to cheery-up the place.

I crossed my ankles, right foot on top. Observed the faint, orange glow seep across the ceiling. Switched feet, left foot on top. Counted the cracks in the wall—noticed there was two more since last week. And all the while I tried to ignore a restlessness in my belly. A type of edginess I couldn’t seem to out run no matter how hard I’d tried.

And freaking-dark, I’d tried. I’m a good runner…fast. Just couldn’t do it.

My long-time bed partner, oblivious to my impatience, whimpered in his sleep, blowing hot breath on my cheek. I glared at him—all four legs in the air and exposed belly of him. As the laziest dog in the world, he wasn’t at all concerned about wasting the best years of his life doing nothing.

I growled my displeasure, but took pity and decided to let him sleep, not like we had anywhere exciting to go. Another twelve-hour shift at the mess tent wasn’t exactly mind blowing. Then again counting cracks in the ceiling wasn’t inter-planetary time-travel either, and nothing coaxed time into going faster than staying busy.

A sharp rap on my door saved me from reciting the Rebellion’s democratic oath—backwards and to Iambic pentameter—and had me out of bed in two seconds flat. Only then did my two-hundred pound Rottweiler raise his head and yawn in the direction of the door.

“No, no, don’t get up,” I mumbled, already pulling on my flak vest to hide any tell-tale signs of boobage. “Let me go and protect us from intruders.”

If anyone thought it weird that I slept in bullet-proof gear, well, it wouldn’t be the first time I’d been questioned if my staircase ran all the way up to the top floor.

I unbolted the lock and slid the heavy metal door open a crack. Even though I had some protection masquerading as a boy on an almost-all-male-planet—males who, according to my mother, were desperate and female-hungry—didn’t mean I was stupid.

I peeked out and recognized the military buzz-cut, freckles, and pale-washed out eyes. It was Tricks, my childhood friend, since well, childhood.  And by friend, I mean, he was one of the few people who knew I was really a girl.

I did a grunted-greeting to cover my surprise. It wasn’t like Tricks to be out of the compound morgue, much less this early in the morning. That he’d risked knocking on my door before I had a cup of freeze-dried instant cafe had my heart skipping a beat—or ten. Good news rarely came a knockin’.

Tricks cocked an eyebrow, or at least I think he did, all his hair so closely matched his pale skin that one questioned if he even had eyebrows. “Hey, Boots.”

Boots was the name I’d been given because of my perpetual search for proper foot ware. Yeah, you try to get a man’s steel toe boot in a size six and see if it doesn’t take over your life.

Tricks turned his head, checking the long corridor to make sure we were alone. “Gunner’s dead. Got sliced up by a big ol’ mother of an alien last night.”

I’d known Gunner, but never considered him a friend. On this planet life was cheap and death came early, so Gunner’s untimely slice-and-dice wouldn’t be reason enough for Tricks’ early morning call. I nodded my sad face a few times and waited.

Tricks did a dramatic pause and threw me one of his stupid, sappy smiles that had me doubting if he was still one of the smartest guys I knew. “He was on the Sweepers team.”

My breath stuttered and my heart made up for those lost beats in double-time…then I stupid, sappy smiled right on back. I’d been trying to get onto the Sweepers team for, well, like ever.

“And another thing,” Tricks continued. “The Captain’s going sideways. There’s pressure from the higher ups to stay on schedule. He’s trying to assemble a team to go out again tonight.”

Yeah, not many men volunteered to go Up. Sweeping for aliens—the roach-like creatures that inhabited the surface of Dark Planet—was dangerous, but a Sweeper was one of the few jobs exciting enough to get out of bed for in the morning. I’d tried to be recruited dozens of times. Got turned down dozens of times—too young, too small, too skinny. But now… old Rock Face just might be hard-up enough to take me.

“Be down in ten minutes,” Tricks said, knowing me better than to make it a question.

“More like three.” I slammed the door, reeling around to look for my combat gear. It had taken awhile, but over the years I’d pieced together my uniform. All gear was hard to come by, but when you’re small and female it made getting on the Sweeper team seem easy.

I pulled down my PS automatic sonic-rifle from above my door. Only soldiers were allowed machine-guns, except during target practice when anyone could borrow a gun for a session. Being that I went to target practice every damn day, I’d conveniently forget to return mine. Being small did have its perks—apparently, some buzz-cuts felt sorry for me.  “Come on, Pretty. We’re going to work today.”

At the word work Pretty jumped out of bed, and bumped my leg for attention. I rubbed his ear while checking myself over in the reflective metal door. My hair wasn’t quite the standard military cut, but not being officially assigned to a squad meant I could be liberal with the rules I didn’t follow. Problem was, even short it tended to be wavy, adding a girly softness I hated. Even the thick black dye I used only camouflaged the color, not the curls, so I improvised by not washing.

Yep, gross, but I figured if I looked as bad as I smelled no one would get too close. So far, only complaints, no takers.

I stuffed a few grenades inside my tactical vest to hide that my tank top was too lumpy for an eighteen-year-old guy. At fourteen my boobs had made an appearance. By eighteen they were firmly established and no matter how tightly I bound them, my chest still resembled more of hills and valleys than pecs and muscles.

Masquerading as and dude was a real downer. But the alternative was worse.

Women on Dark Planet were a commodity. Men outnumbered females five to one. Add in the superstitions about women and this Prophecy thing that clung to me worse than body odor, and you had a recipe for a permanent lock down on my life.

I triple checked the laser sight, then pushed my night vision shield on top of my head. I didn’t give a fierce what old Rock Face said. I was going to be a Sweeper. I had mad skills with this PS sonic-rifle. Skills that had a lot more value to the Rebellion than washing dishes. “That’s right Pretty,” I said reaching down and patting his side. “We’re gonna finally get our chance to kick some bona fide alien butt.”