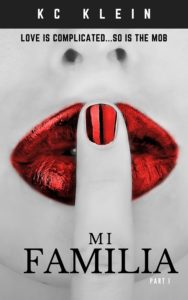 “An addictive series that is a non-stop adrenaline overload that I’m thrilled to recommend to others.”

The second book in a gripping, new-adult mob series.

Being part of the mob is complicated…but so is staying alive.

Jack’s missing and I’m the only person who can find him.

To find Jack, I will have to be willing to enter a world where goodness and faith can not exist and sunlight is consumed by the shadows. Where I’ll have to give myself over the cruelty and power and become suspicion itself. And I wonder if my soul is up to the task or if I’ll come back like the very people I’ve been running from my whole life.

The linen pants suit doesn’t stand a chance. It seems to melt before my eyes, taking the person inside with it.

That person is Juanita Sanchez, now Juanita Martinez, who’s sitting across from me at my kitchen table, inside my trailer, crossing and uncrossing her ridiculously long legs for the past ten minutes. She’s been flashing me the red bottoms of her classic beige pumps that should’ve screamed matronly and mundane, but instead whisper poise and prosperity.

A slight shine has appeared on her skin despite the constant patting of her face with the McDonalds napkin I’ve handed her ten minutes ago. I could’ve told her that a linen cotton blend pant suit wasn’t trailer-trash approved.

She eyes my jean cut-offs and navy blue tank top with a little less disdain and a little more desire.

“Yeah, AC stopped working a few days ago, so we’re on the windows-open-multiple-fans savings plan,” I say, sitting across from her, trying hard not to drum my fingers.

She nods and smiles tightly—one that lands somewhere between a swallow and a grimace. “Oh, I’m fine,” and then beams me with a row of straight teeth that look impossibly white behind her red lipstick.

My mother calls that particular color “whore red,” of which she has ten tubes. Somehow though, on Juanita it doesn’t look cheap…it looks classy.

I’m used to being around beautiful women, my mother for one. But Juanita, with her shiny black hair, chiseled cheekbones beneath caramel skin, and big brown eyes so dark they look like mirrors, could’ve easily intimidated my mother.

“So…uh…the wedding went well?” I ask, not because I care but because she’s been here all of fifteen minutes, and I still have no idea what she wants. Since I’d met Jack’s sister at her engagement party, it’s the only topic I can come up with.

“Oh, the wedding was beautiful. I should’ve brought pictures,” she says, making an attempt to get her phone from her purse. A purse that I notice she keeps on her lap in the same way a person does when riding a bus or using a public toilet.

“That’s okay,” I say, putting a stop to the rummaging. “Maybe another time.”

She looks relieved, and then her gaze starts doing the darting thing again where she looks from floor to ceiling, to hallway then back to the kitchen as if she’s some alien life form that’s been sent to Earth to study local civilization.

I know what she sees without following her gaze—the orange shag carpet that’s gone out of style in the 60s and fake wood paneling that’s never been in, the yellow appliances that are still holding on, and me—frizzy-haired trailer-trash with no prospects. Her gaze finally lands on the brochure on the kitchen table, and her face lights up as if she’s just found something in common with the foreign race.

She picks it up before I can stop her, and my heart sinks. “Community business school. Are you thinking of going?” She flips it over, reading the back. “Hmm, I’ve never heard of this school. Is it good?”

I snatch it out of her hand, embarrassed. She probably went to Yale or Harvard. No Berkeley, I can definitely see her there. “No, I’m not. Just a flyer left on the door earlier, and I haven’t gotten around to throwing it away.”

Right, because we have so many people coming to our door in the middle of nowhere. I mean, I don’t even think Google knows where we’re at.

When the dark-tinted, black Escalade pulled up my long drive, I thought for sure the mob was here to spray the entire trailer with bullets. But when Juanita stepped out of the SUV in high heels and Gucci sunglasses, I almost wished for the former—well, and that I’d at least shaved my legs in the last week or so.

I asked her to come in and offered her a diet soda with a straw, too embarrassed that the only glasses we owned all had Disney characters on them. Not that we’re Disney people, but the whole set was on sale at the Goodwill—all twenty-four of them.

She takes another sip of her soda, in what I hope is an attempt to wet her throat so she can finally tell me why she’s here.

Um, nope, just more awkward staring. I can’t stand it any longer. “Can I help you with something, Juanita?” Then I think, maybe she’s on the run, and coming to my trailer in the middle of nowhere Texas is her idea of fleeing the country. “Are you in trouble?”

She pats her black hair that she’s slicked up into a bun, and I wonder what she thinks about my humidity-frizzed-out ponytail. “I actually wanted to talk to you about Jack.”

I raise a brow. Jack and I have never been a thing, but as far as his family goes, they thought we’d dated for a short time. We hadn’t. Nothing could be further from the truth. “I haven’t seen him for at least…” I think back to the day he dumped Bear and I off at the trailer without even a backward glance. “…four months or so.” I smile to let her know the memory doesn’t sting…much, and then I reach down and pat Bear’s head just in case the memory doesn’t sting …much for him either.

“That’s what Jack had said when I asked about you. He told me that you missed being at…home.” She looks around at the “home” I so desperately missed, and then starts to fiddle with her purse.

I keep silent, simply unable to come up with one good reason I’d ever willingly come back here.

“The thing is,” Juanita continues. “I saw you two together. The way Jack looked at you. Was so protective of you.”

I choke on my own spit but manage to hold it together some.

“And I was hoping…the thing is… I need your help.” She takes a deep breath, her dark-red fingernails in a death grip with her purse as if I might snatch it out of her hand and run. “Jack’s in danger.”

Of everything I expect out of her mouth, this isn’t it. My stupid heart elbow-jams me in the stomach, and I inhale in pain. “In danger, how?”

“I think Emilio is holding Jack captive at his club, and I need a pair of eyes to go in and tell me if he’s there or not.”

I wait for her to continue, expecting some ultra-complex, double agent escapade until I realize that is it. That’s her plan.

She doesn’t say no, so I assume that’s a yes.

I didn’t graduate from high school, got my GED instead, and the chances of me going to college are zero to nil, but even I can tell this plan is utter crap. Someone needs to break it down for her. “And you’re thinking I could simply stroll into Emilio’s club, order a few beers, pat a few backs, and then ask Emilio to take me on a tour?”

I cut her off. “You do know Emilio hates me. I mean, really hates me.”

Juanita nods. “Yes, he does, but only because you embarrassed him,” she says as if that makes any difference. “Emilio’s biggest downfall is his pride, and I know that if you came to him in some sort of…compromising position, he wouldn’t be able to turn you away.”

At least she has the decency to chew on her bottom lip. I decide, right then and there, if she gets lipstick on her teeth, I won’t tell her. “I was thinking we could make up the story of you being desperate for money…” Her voice trails off, embarrassed.

So that’s why she came to me. I’m the only poor person she knows. I sit back and cross my arms in front of me. “And I’m soooo desperate that I…” I wait for her to fill in the blank.

“Are willing to apply for a job at Emilio’s club. But just apply,” she assures me. “Not to take the job or anything, but when you go in for the interview, simply take a look around and tell me what you see.”

My gaping mouth must say it all since she rushes forward. “I’ll pay you. A sizable sum, if that’s what you’re worried about.”

I shake my head, still confused. “If that’s what I’m worried—what?” Then realization rips through me, and I sit straight up as if the back of my chair has just been set on fire. Bear, sensing my agitation, begins to whine at my side. “And what job exactly do you suppose I apply for?”

Because not only am I the poorest person she knows, but also the closest one to being a stripper.