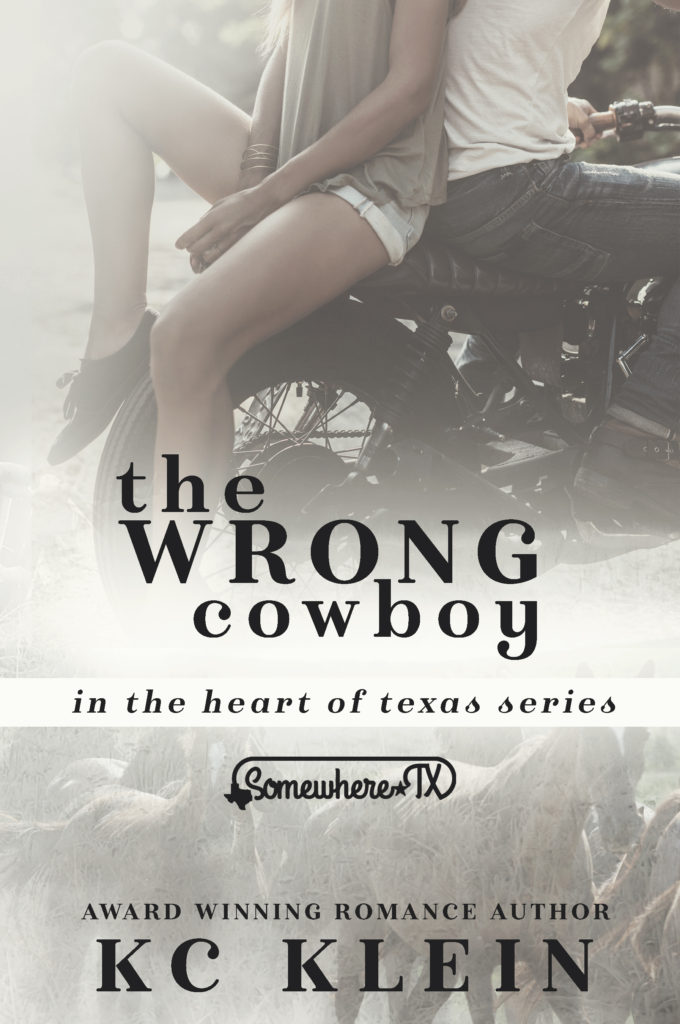 “KC Klein is an author to watch.”

“This book is the best crack for those of you who are addicted, like me, to the angsty, emotional, complex romances.”

She’ll do anything to save her company. Even if it means marrying The Wrong Cowboy.

Savannah, trucking company heiress, has learned the hard way that men with money always make the rules… and she’s sick of losing. Now, with everything she loves on the line, she’ll do anything to keep her business and family home afloat, even if it means marrying the wrong Sloan.

Tatum Sloan ruined his chances with Savannah the day he pretended to be his twin brother and slept with her. The black sheep of the family, Tatum’s never cared about anything or anyone enough to fight for it… until Savannah. Now, unable to deny their connection, he’s determined to prove it’s him—not his wealthy brother—who’s the right cowboy for her.

The Wrong Cowboy is the fourth installment in a gripping contemporary romance series. If you like gut-wrenching emotional love stories, fascinating and complex characters, and happily-ever-afters that are worth fighting for, then you’ll devour KC Klein’s latest story of love and redemption that’s guaranteed to stay with you long after you close the book.

The woman he was dating had just proposed to him, which was odd, since neither one of them was that drunk, nor particularly fond of each other.

Chandler Sloan took another sip of his whiskey neat to buy some time. No, he had heard right. She’d definitely asked him to marry her. Strange, he’d done the proposing to someone once before, but being the one proposed to was a totally new experience.

He studied the woman sitting across the table at the classy upscale hotel bar. Since, technically they were dating, he’d invited her to be his plus-one at the annual Sustainable Energy Fundraiser event. She was beautiful. He’d give her that. It was no wonder his brother had had a crush on her back when they were kids.

Of course, when they’d been kids, she hadn’t been quite nearly as filled out in her skin-tight, shiny black dress. Or not nearly as made up with her long, red hair swept off to the side leaving one shoulder bear, or her full lips carefully lined and painted and eyes darkened with heavy shadow.

Savannah Fitzgerald looked like something out of a magazine. Not at all like the other girl Chandler had proposed to all those years ago.

That girl had been plain—mousey hair, nondescript face. The only thing Jayne had on the seductress sitting across from him were her eyes. Yes, her eyes had been different.

When he’d gazed into Jayne’s eyes he’d seen stars, planets, galaxies. He’d seen possibilities he’d never thought of before. He’d seen the man he wanted to be. The man she’d thought he could become. When he looked into the woman across from him he only saw green eyes lined in black—no stars, no planets, no possibilities.

He shouldn’t judge. He was sure his gaze reflected even less.

“Just think of it, Chandler.” Her lips curled at the tips as she circled the rim of her wine glass with her finger.

If this had been a different woman, at a different time, he’d have taken the gesture as a prelude to what would come in the bedroom. Instead, he took the gesture for what it really was—a nervous tick.

“Merging our businesses would be profitable for both of us. F&S is a good investment.” Savannah reached into her slim purse and pulled out a folded piece of paper.

She smoothed it out on the table, using her long, manicured nail to point to a black mark that was supposed to indicate the border between the Sloan’s and Fitzgerald’s land. “With your influx of cash, F&S could build a bridge here.” She tapped her finger to the squiggly line that represented the river running through both of their properties. “This would allow my trucks to circumvent the thousands of acres of land” –she glanced around to make sure no one was within ear shot— “that the damn VonBrandts have pushed to become reclassified as National Forest.”

He liked that she was cautious. One didn’t want to be overheard bad mouthing the very family that was heading up this annual fundraising shin-dig. The charity was to support sustainable oil drilling and the wildlife habitat of wolves or something or the other. Chandler had nothing against protecting a few pine trees and the furry-four legged animals the VonBrandts seemed so taken with. He just didn’t like when it prevented him from making money.

Apparently, Savannah felt the same way as she continued on with her proposal. “With this bridge, F&S could save millions by the decrease in expenses and the increase in expedite shipping fees. Within a year, we’d break even, within two, you’d make your investment back, within three, we could start expansion.”

As the primary heir of Sloan Enterprises, Chandler had his share of business proposals thrown his way since his father’s diagnosis with cancer. Just never one that involved sharing his bed. “If everything goes the way you say, then it seems it could be profitable for us both, but it also looks as if I’m the one taking all the risk. That’s a big chunk of money you’re asking for.”

Her eyes glinted with emerald hardness—maybe from the shimmers on her black dress or maybe it was a quick peek into her soul. “You’re forgetting something. I’m the sole heir to F&S Trucking and Fitzgerald land. Our children will inherit from both sides of the family and when you combine the Fitzgerald and Sloan lands we’d have…” Her voice trailed off to let him finish.

Chandler had no problem completing her sentence. “The biggest ranch in all of Texas.”

She smiled. “A bon-a-fide dynasty, if you ask me.”

He liked how her mind worked, and sleeping with her wouldn’t be too bad. A little cold he supposed, but not too bad. “Yes, but you’d still be sole owner of F&S.”

Savannah dismissed his concern with the wave of her manicured hand. “Please, Chandler, the last thing you want to do is run another company. You’re a rancher, not a trucker. Besides, you need a wife. You’re getting too old to tromp around as a bachelor and people in business take a man more seriously if they think he’s settled. They definitely take a woman more seriously.” Resentment sharpened her voice, but that was to be expected. Trucking in Texas was primarily a male dominated business.

“Together we’d be unstoppable,” she continued, her husky voice painting the picture she wanted him to see. “I’d have the Sloan name behind me. You’d get a wife to host all of those tedious social engagements you hate to attend and who’d turn a blind eye to all your, shall we say, indiscretions.”

He nodded his approval. The last thing he wanted was to be in charge of a whole bunch of truckers or be faithful to a woman he didn’t love, and Savannah was savvy enough to understand this. Good, because he wouldn’t go into business with an idiot.

Chandler looked down at the hand drawn map, crunching numbers in his head. “Your best bet is to build a road here,” he pointed to an unmarked area on the map. “If you go here, you’d cut down even more miles round trip for your trucks and the cost wouldn’t be nearly as much as a bridge. Profits within the first year if not sooner.”

She studied the map a few moments. “I wasn’t sure if that land was part of Sloan Enterprises or not.”

“More or less.” He shrugged.

The beginnings of irritation tickled the back of his throat. He didn’t like to be questioned in regards to business. “It’s more more than it is less.”

Savannah shrugged. “If you say it is, than who am I to disagree?” She smiled sweetly, but the money hardness of her eyes told him she was no fool and he’d be smart to remember that. “I knew I picked the right cowboy.”

Chandler hesitated as the tickle became a warning and when dealing in business he always listened to his gut. “As opposed to the wrong one? Was there someone else you had in mind?”

She took a sip of wine, but not before he’d detected her uneasiness. “There’s no one else. This is business and I need the owner of Sloan Enterprises as my business partner. And…” Her smile came double-dipped in flattery. “All the resources that come with it. I assure you, I’m not looking for a soul mate. No, I chose the right man for this deal.”

He nodded. She needed a man who understood how things worked and wouldn’t complicate things by adding love to the mix. He couldn’t blame her. Felt the same way. Which was why his father had put Chandler in charge of the family business and not his twin brother, Tatum. His twin wasn’t without the know-how, but Tatum had his priorities all messed up. Believed in leading with his heart instead of his head and God only knows where that would’ve taken Sloan Enterprises.

Still, the beauty of negotiating a marriage of convenience was everything could be put out on the table. If that had been the case with his previous proposal, he’d never had ended up here. “I’m glad you’re sure. Because even though I don’t expect fidelity, I won’t be made a fool of. Even whispers of my wife sleeping around will land you in divorce court faster than you could say ‘one-day-shipping’.”

“That’s one thing you won’t have to worry about. If I can’t promise faithfulness, I can promise discretion. You’ll never hear of a scandal from me.” She released a small sigh as she leaned forward, allowing him to get a whiff of her perfume—roses and green pastures. “It’s a good deal, Chandler and merging our businesses through marriage is the least complicated way. It’s good for both of us.”

It was. And maybe after one more drink, he’d be able to convince himself Jayne leaving him had been for the best. And that the scent of roses wouldn’t eternally bring her to mind. And that he wouldn’t have had this beautiful redhead proposing if he’d already been married to that brown-haired bi—

Chandler quickly signaled for another round from the waitress, cutting off his downward thoughts mid spiral. “I don’t have the detail of my father’s will yet, but the doctors don’t give him long. A month or two at the most.”

Savannah leaned back and raised her glass to him. “Then I’ll wait with bated breath for your answer.”

He raised his empty glass in response. Had no doubt she’d wait. He’d heard the devil had more patience than a saint, and if this wasn’t a marriage that came at the cost of his soul he didn’t know what was.