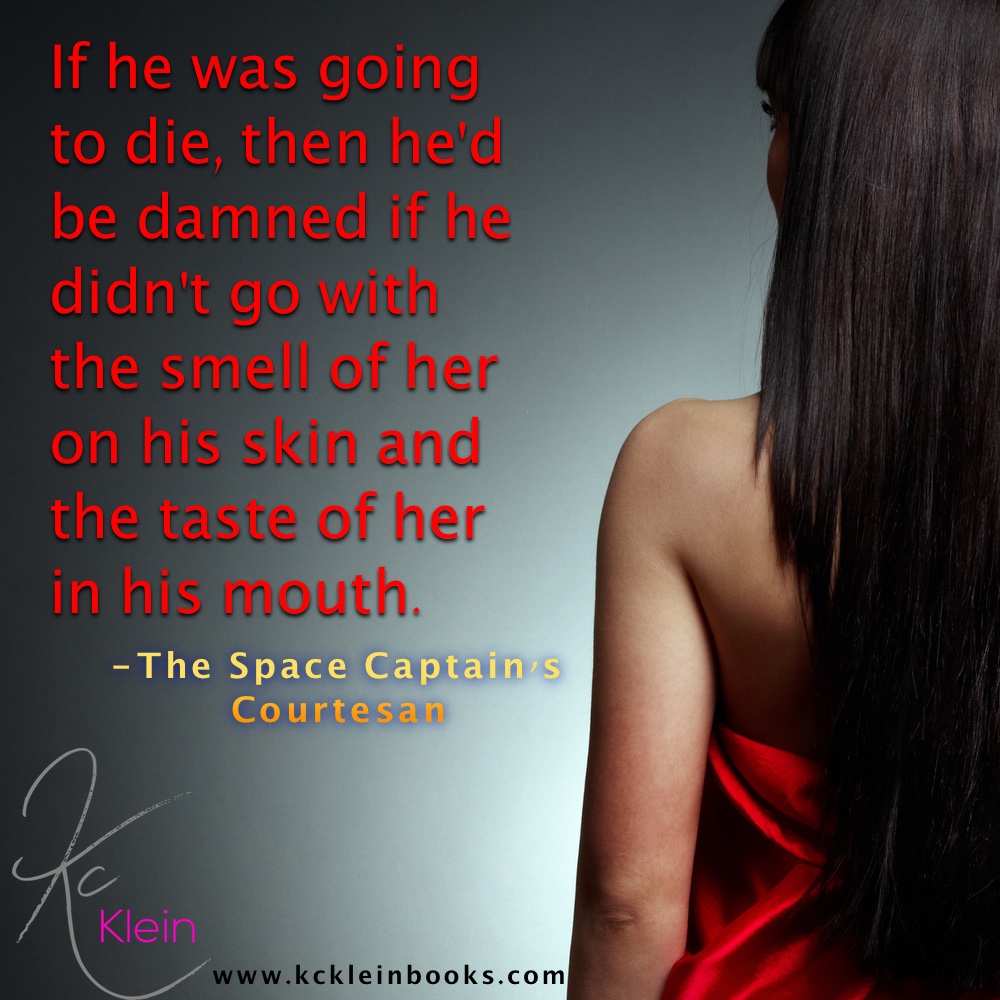 The Space Captain’s Courtesan is here

She will do anything to convince him to become her hero, even if that means becoming the one thing he can’t resist…The Space Captain’s Courtesan. 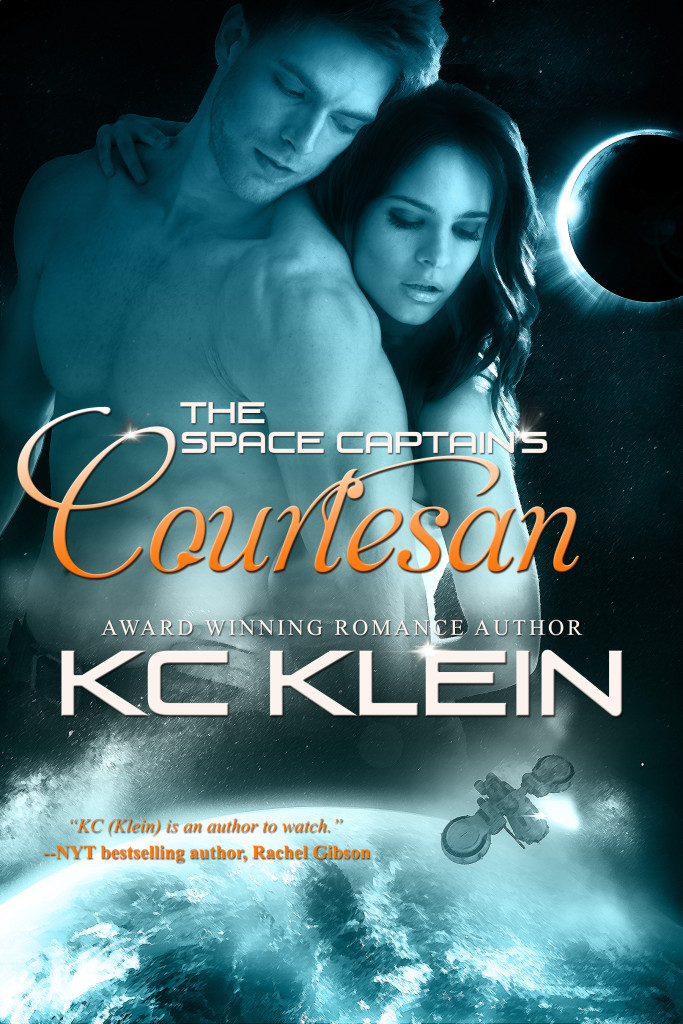 Princess Mya Centauri is stranded and alone on the shady Bates Space Station. With rumors of her father’s dethronement escalating, she needs more than her wits and entitlement to protect her—she needs a hero. So when she unexpectedly finds herself mistaken for some whore by Centauri’s most notorious assassin, and at one time her father’s most trusted man, she decides things can only get worse.

But with lives at stake and kingdoms in jeopardy,  Mya will do anything to convince the one man who hates the Royal family above all else to become her hero, even if that means being the one thing he can’t resist…The Space Captain’s Courtesan.

“One time won’t be enough. I’ll tell you that much, princess,” he said as his hand was traveling down her outer thigh and then back up to cup her bottom.

A punch to her gut couldn’t have been any more shocking. She sat straight up, pushing him off with a burst of strength she hadn’t known she possessed. “What did you say? What did you call me?”

Did he know? Had he known all along? Was he loyal to her father or…her brother? Would he keep her captive until her brother arrived for the reward?

“What? What’s wrong?” He sounded a little like a child whose favorite toy had just been taken away.

“You called me princess. Why would you do that?” She couldn’t quite make out his features and took comfort in the dimness as she tried stuffing her breasts back into her suit.

“It’s an endearment. And since I don’t know your name I thought it sounded better than whore.”

She gasped. Where was that tranq-pen when she needed it?

“Not that I have anything against whores,” he back-peddled. “I love whores. Look at you. I have absolutely nothing against you.”

He sighed a very put-on-upon sigh. “Ah right, there’s a politically correct name. Ummm patron-pleaser? Was that it?”

“Patron-please this.” She had found the tranq-pen beside her leg and in one quick movement had the needle stabbed deep into his shoulder.

Mya quickly scrambled off the bed, not at all sure where she was going to run.

He pulled the pen out of his arm and looked down. “Tranq-gun? Jupiter’s tits, you stuck me with a tranq-gun?”

Mya’s heart was pounding. She’d never actually used the tranq-pen before. The instructions had said the effects were immediate, but as to the definition of immediate she wasn’t sure. Could he kill her in the amount of time he had before the drug took effect? It looked like he could kill very quickly. “It’s a tranq-pen, not a gun. The effects will only put you out for a few hours verse a gun that could put you down permanently.”

Any second now. The effects should kick in right about…

“Ahhhhh.” He threw the pen against the wall and lurched for her, hands extended as if to close around her throat.

Mya never moved so fast in her life. She jumped out of the way and headed toward the exit. She didn’t make it that far. He tackled her legs and they both went down. She placed a well-aimed kick at his head. He caught her foot and twisted her leg. She rolled over on her back to prevent her knee from snapping.

Now. Now. Now would be good.

He held her to the floor, both arms above her head. His knees pinned on top of her legs. “Why! Why did you tranq me? Is it to rob me blind? Is that it?”

Her space suit was still unzipped, breasts barely covered as her heart slammed into her chest. “Holy Jupiter, I gave you enough tranq to down an elephant. Why are you still awake?”

He shook his head like a rabid dog. Suddenly, she was glad of the scarce lighting—not wanting to see in his eyes what he was planning to do to her. “No. No, if I am going out, you’ll be here when I wake up.”

He clasped her wrist and stood, dragging her over to his bag in the corner. He stumbled, and for a blessed moment she thought he was going down. Then he righted himself and dragged her across the floor like a rag doll.

When she saw the current-cuffs, she renewed her efforts to fight. There was no way handcuffing her would work out in her favor. “Help. Help!”

“Scream all you want. There’s no one here that’s going to save you.” Even in the graying shadows she could see his wicked smile.

Everything happened so fast. A cuff was slapped on her wrist, the other end to his. “That should keep you,” he growled.

She was sprawled out on the floor, arm at an awkward angle, spacesuit surrendering any attempts at decency. “My God, was there even tranquilizer in that pen?”

“Apparently not, Princess. I feel fine.” He took a step, then stilled. His body swayed, one arm out for balance. Mya had about two seconds to get up and push him in the direction of the bed. She had no intention of getting crushed underneath two hundred-plus pounds of unconscious man.

She’d once watched a logger take down a huge pine that had the misfortune of being in the path of Prince Sar’s new swimming pool. When the tree fell, the whole ground shook with the vibration. Watching him fall, Mya felt sorry for the bed.

The momentum of his fall propelled her forward, and she ended face down, half on the bed and half off. It was two full minutes of stilted breathing and silent praying before she was positive he was out. She was going to issue a strongly worded complaint to whoever defined the word immediate in the tranq-pen advertisement.

She pushed her sweat-dampened hair out of her eyes, shoved her breasts back into her suit and zipped back up. With dignity resorted, Mya surveyed her predicament.

Oh Saturn’s rings, she was so screwed.

She needed to think, and being face down in the bed wasn’t helping. After much grunting and shoving, she got the man on his back.

“Lights,” she called out.

Nothing happened. She did a mental eye roll. Of course, the room would be programed to respond to his voice. Instead, she scrambled, with some difficulty, to the side of the bed where the manual controls were located.

The room lightened gradually. She sat on the bed, suddenly exhausted. Mya looked down at the current-cuffs that attached them together. She didn’t have a lot of experience with cuffs. Okay, none at all, really, but she did know that they required the owner’s thumb print in order to open them. Easy enough, him being unconscious and all. She searched for the thumb sensor and swore. The thumb print would’ve worked if, of course, they’d been remotely modern. Instead, these current-cuffs were archaic, needing a pin code to break the electrical charge that kept them together.

Mya let her head fall into her hands and then glanced at the man passed out cold beside her. Curiosity and a pang of familiarity had her studying his features more closely. The shape of his lips had her remembering someone else’s face. Someone she’d known in a different place. In a place where fondness clouded her memories and a sense of happiness curled her lips. With a finger, she brushed his hair out of his eyes and gasped.

She knew those eyes, that line of a jaw, the profile of a strong roman nose. He was a tad bit older and more than a tad bit rougher around the edges, but there was no mistake.

It was him. The man she’d been in love with since she’d been eleven years old.