I’m very happy to release the 5th book in the Texas Fever series, The Lonesome Cowboy.

The pre-order is live and up at all major platforms. The book will be LIVE on March 30th 2016.

Happy reading everyone and enjoy the first chapter from Lauren and Cash’s story. 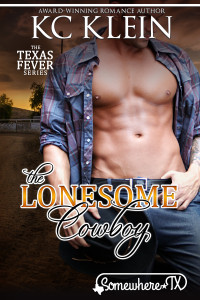 The one thing Lauren Avery wants is the one thing she can’t buy—a child of
her own. With her messy divorce still fodder for the gossip rags and her
father’s political campaign heating up, Lauren’s shocked to find that one
careless night with a sexy bull rider might just turn out to be the best mistake she’s ever made.

Professional bull rider, Cash Rodriquez has loved Lauren since high school,
but she’s always been out of his reach and out of his league—something a drunken trip to the front seat of his truck can never change. But when a picture of
Lauren, pregnant in Somewhere, goes viral, Cash can’t help but wonder if his worst nightmare—fatherhood—has just come true.

The Lonesome Cowboy is the fifth installment in a gripping contemporary romance series. If you like gut-wrenching emotional love stories, fascinating and complex characters, and happily-ever-afters that are worth fighting for, then you’ll devour KC Klein’s latest story of love and redemption that’s guaranteed to stay with you long after you close the book.
Download The Lonesome Cowboy today and fall in love all over again.

“Mrs. Avery?” There was a timid knock on the public restroom’s door. “Is there anything that I can help you with?” asked Mrs. Walker, the pretty librarian who was organizing the ribbon cutting ceremony for the newly renovated library in Somewhere, Texas.

Oh no, there was nothing, absolutely nothing Lauren needed help with. Especially from the young woman who wore dark-rimmed glasses and a button up, lacy collared shirt as if she was thumbing her nose at the stereo-typical sexy librarian. Lauren had done this so many times—thirty-one to be exact—and she needed no assistance from someone who’d probably only read about this in romance novels and “How To” manuals.

“Everything is fine, Mrs. Walker. I’ll be out shortly.” Lauren used her practiced public voice, as smooth and uncomplicated as vanilla ice cream. She at least owed the librarian that much, since she’d commandeered the public restroom with a pointed stare and a “please make sure I’m not disturbed” speech that no doubt would be repeated in an exaggerated tone during happy hour with the other librarians.

Lauren had only been in Somewhere a little over an hour, and already she was giving orders and making enemies. Not that unusual. Seemed like she always came across a tad too hard, too abrasive.

She straightened her shoulders, not much she could do about it now. Instead, she gave herself another critical glance in the bathroom mirror—as if she hadn’t been doing that for the past ten minutes—and patted the blonde bun that would’ve made a prima ballerina proud. Her gaze found some imaginary creases in her black pin-striped skirt to brush out, but closed in a fist when her fingers trembled instead.

For Lord’s sake Lauren, pull it together. There was nothing worse than an over-reacting, hormonal woman. She was a senator’s daughter, a businesswoman, a public figure, and role model. There was no reason that a tiny, white pee stick should get her so rattled.

She checked her watch—thirty seconds more and then she’d look at the results, throw the stick away and carry on with her day—like she had after the first dozen times, especially after the first twenty.

But this time was different. This time she wasn’t a married woman hoping, praying, begging God for a baby. This time she was a recent—as in four freaking weeks recent—divorcee, still reeling from her latest brush with the paparazzi, and whose father was in the middle of a very public political campaign. She had no business being pregnant.

Yet, here she was.

If nothing else, the last few years of fertility doctors and gossip news reporters had taught her the importance of having a plan. There was a certain protocol she’d learned to follow. It made things easier. Made the bone-crushing disappointment less real.

1. Never look early. She never even glanced at the stick before two minutes were up.

2. Only look once. Lauren would take her time. Make sure there was no mistake and then throw the test away as if it never happened.

3. Move on with life. This was the most important. Crying and moping around accomplished nothing. The best thing to do was to carry on with her life and not think about her “un-pregnant” state again.

Efficiency was the key here. Efficiency and decorum had been the cornerstones of her life. Had gotten her through a horrible marriage and an even worse divorce.

“Mrs. Avery, they’ll be ready for you in five. Are you sure there isn’t anything that I can get you?” Mrs. Walker again. Her voice was on the edge of panic.

Lauren glanced in the metal framed mirror, seeking the reflection of the bathroom door behind her. She could almost see Mrs. Walker—ear pressed up against the door, fingers wringing, torn between staying on schedule and not wanting to piss off the Texas senator’s daughter.

She couldn’t blame her, not really. They were on a tight schedule and it was easier if everything went according to plan. Mrs. Walker hadn’t worked with her. She probably wanted to go over what Lauren would say on behalf of her father, Senator Avery, who was supposed to be here showing his support to the Kids Need To Read literacy charity he funded. But he’d canceled at the last minute, throwing Lauren into an impossible situation of being a representative for the Avery family, when the gossip magazines had barely cooled off over the tantalizing tidbits from her divorce.

Lord, after this was all over she was seriously going to consider becoming a shut-in.

But she was a professional, if nothing else. Lauren knew how to do these publicity events. Had learned from the best—her father. She didn’t need any last minute prepping or handholding. Of course, Mrs. Walker didn’t know that, but that couldn’t be helped. Lauren needed these few moments to compose herself.

She pinched her cheeks, not liking how pale she looked. The press would make mincemeat out of her if she looked anything less than the reigning Ice Princess—the name they’d dubbed her. It didn’t matter that she’d been suffering from full out nausea since getting on the plane this morning, or that the months of missed periods—as common to her as a Vera Wang on the red carpet—had started to add up. Or that the strange tenderness in her breasts was what finally made her stop at the airport drug store for a pregnancy test.

Lauren hadn’t been feeling her best for months. But that was to be expected. She was rundown, overworked. Her father’s campaign was winding down and this had been the closest and most debated election of his career. Not the best time to have a very public divorce from John Hamilton, the son of a wealthy oil family and one of her father’s most loyal contributors.

“You need to get back out there and show the world that everything is fine,” her father’s voice as commanding over the phone as it was in person. Even from over fifteen hundred miles away, he still had the power to make her go stiff and cause her to close down over a wave of self-doubt. “Show them that no one can keep an Avery down. Show them that you’re young and beautiful and, for God sake’s, when you look into the camera, smile with some warmth and not like you’re a damn frigid wife with a headache.”

Warmth. She had no idea how to be warm. The more pressure she felt, the more rigid and formal her movements became.

Sticking my dick into an ice sculpture would be hotter than you.

Her face went a shade paler at the memory, her embarrassment blooming like twin burns on her cheeks. Lauren shook her head, pissed she’d chosen this moment to let John’s parting words rear their ugly heads. Her only consolation, she’d never let him see how deeply his words had wounded.

She rubbed at her makeup, choosing pale and washed-out over circus clown. That was the best she could do, and under the circumstances, that was pretty damn good. She checked her watch again. Two minutes and forty seconds, plenty of time for an accurate result.

A deep breath for strength and a clenched jaw for resilience, she grabbed the test off the white porcelain sink, angling it to make the most out of the cheap florescent lighting. She’d seen it all before. The first window with the bold vertical line, the third window with its dark horizontal control, but it was the middle window. The one that always showed round and blank and huge in its whiteness—was different. The horizontal line that she’d given up on ever seeing was there.

A sharp cry flew from her mouth before she could stifle the scream. She couldn’t breathe, couldn’t move, and yet the whole world seemed to be spinning outward and closing in on her all at once.

“Mrs. Avery, are you okay? I’m coming in.” Mrs. Walker pushed the door and ran to where Lauren stood. Then Mrs. Walker morphed into the mirror image of Lauren—gaped mouth, shock still, both staring at a small white stick.

The librarian recovered first. She glanced up at Lauren with a weighted smile that flashed a shared commonality in womanhood. “Well, honey,” she said, apparently feeling that the need for formality was over. She placed her arm around Lauren and gave a reassuring squeeze. “Looks like congratulations are in order.”